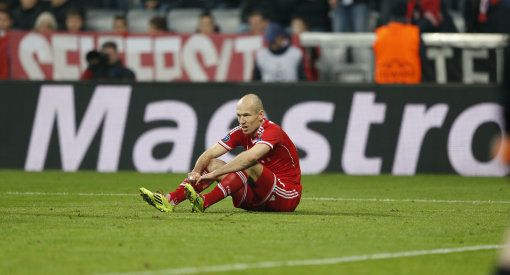 Now, believe us, we take zero pleasure in defending Arjen Robben and his ilk. Nil. Zilch. The man continues to offend us almost each and every time we seem him play; swooning daintily to the ground under the slightest duress with the same frail, feeble, gossamer-light constitution as the elderly well-to-do ladies who faint at the first sight of blood in Agatha Christie stories.

Diving is a sporting cancer. We abhor it. It is the tactic of the inferior, the cowardly. Yet it prevails.

Anyway, while watching Arsenal-Bayern Munich last night, we – like many other Gooners/neutral fans, we presume – were overcome with apoplectic rage when Robben seemingly took a couple of steps for deciding to mimsy his way to the ground under a “challenge” from Santi Cazorla just inside the penalty area.

However, in the cold light of day we feel we must apologise to Robben. Yes, the fall looked utterly pathetic (almost Gilardino-esque) but, on closer inspection, it would appear the Dutchman had fairly good grounds to hit the deck.

Take a close look at these ‘ere GIFs…

While not overly apparent in the first GIF, the second clearly shows Cazorla giving Robben’s left heel a shredding with his studs after making up ground behind him – which, like it or not, is going to hurt and definitely constitutes a foul.

I’m afraid we’ve got to hold our hands up there. We were wrong. It was a foul.

As for the penalty decision… 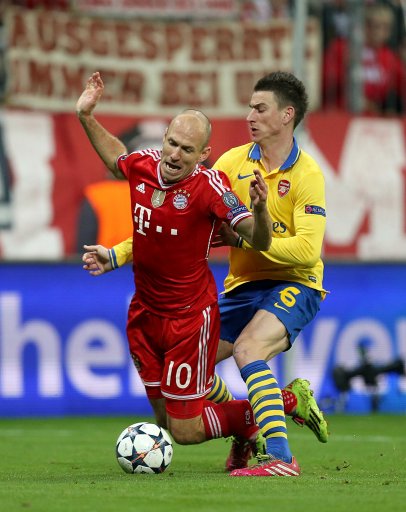 Pathetic. It would seem that defending is being slowly phased out of the (contact) sport entirely.