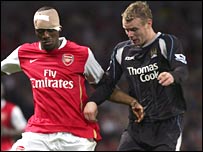 Arsenal move into third in the Prem table, above Liverpool, ending Man City‘s five-goal unbeaten run. Tomas Rosicky ghosted into the box, David Platt-like, to open the scoring. City hit back through DaMarcus Beasley, who finished neatly just before the end of the first half. Despite some good play early in the second half, City were scuppered when Cesc Fabregas and Julio Baptista scored with two fine strikes. Watch highlights of the game here.