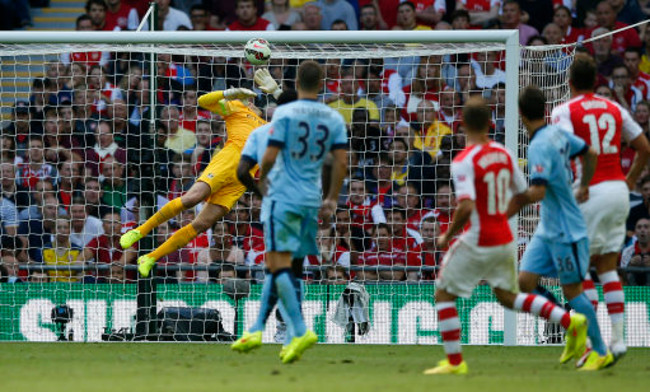 Arsenal won their second piece of silverware in 85 days after comfortably beating Manchester City at Wembley.

The Premier League champions were surprisingly heavy-legged against an Arsenal side which featured new-boys Callum Chambers, Mathieu Debuchy and Alexis Sanchez. However, it was Santi Cazorla who opened the scoring, firing past willy Caballero before Aaron Ramsey produced a classy finish from a pass by Sanchez.

Overall, City struggled to match the Gunners in the first period, with summer-signing Fernando struggling in midfield and forgotten man Dedryck Boyata failing to do his chances of a regular starting berth any good in defence.

After the break, City improved, only for sub Olivier Giroud to seal the deal for the Gunners courtesy of a superb effort. 3-0 isn’t a scoreline Manuel Pellegrini’s side have found themselves on the wrong end of too often but the final scoreline was well deserved.

Both sides were without a number of first-team stars but Arsen Wenger and co. will be quietly confident of mounting a serious title bid in 2014/15.