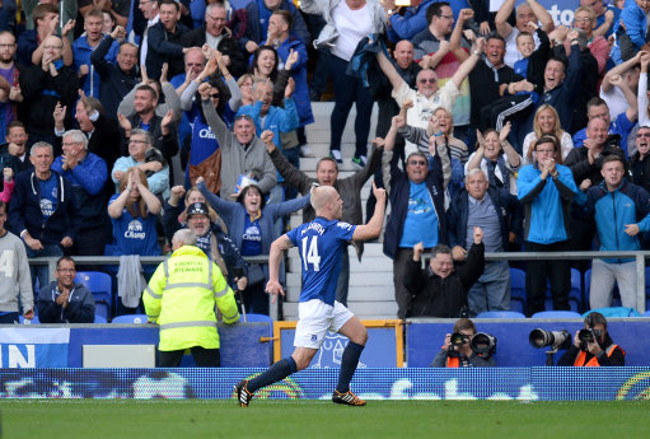 Arsenal came from two goals down to claim a had-fought point at Goodison Park in Saturday’s late game.

Despite having World Cup winners Per Mertesacker and Mesut Ozil back in action, the Gunners struggled to match the Toffees in the first period.  Indeed, it was playmaker Ozil who failed to track Seamus Coleman for the first goal, with the Irishman heading home from close-range. Then Mertesacker was turned (albeit courtesy of a foul that wasn’t given) by Romelu Lukaku before Steven Naismith fired home (again, albeit from an offside position which was missed by the officials).

Alexis Sanchez, playing as the Gunners’ lone centre-forward struggled to make his mark on the game and was replaced by Olivier Giroud at the break. With the Frenchman providing some much needed muscle up front, the visitors started to fight back and were eventually rewarded when a Santi Cazorla cross was steered home from close-range by Aaron Ramsey late on. And then, with the game almost over, Giroud headed home the equaliser from a fabulous Nacho Monreal centre.

While Roberto Martinez will be disappointed to have seen his side squander a two-goal advantage, Arsene Wenger will be relieved with a point but his side’s performance certainly highlighted the need for more signings before the transfer window closes.