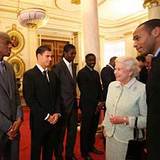 The Queen has revealed that she has supported Arsenal for more than 50 years. The Sun claims that the Queen has followed in the footsteps of the late Queen Mother by following the Gunners.
A ‘senior royal source’ confirmed that Her Majesty’s admiration for former player Denis Compton had led to her being a Gooner throughout her reign. The Arsenal squad visited Buckingham Palace last October after the Queen was forced to pull out of opening the Emirates Stadium. [Via The Sun, Rob Parker]