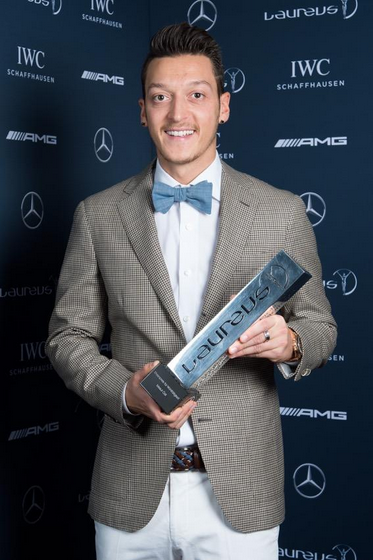 What a cracking bowtie too!

Arsenal’s injured schemer Mesut Ozil picked up a “Sport For Good” prize last night at the annual Laureus awards following his decision to pay for 23 Brazilian children to have life-saving surgery this summer.

The midfielder, who has somewhat struggled to find his best form with the Gunners as well as having to deal with a messy court case involving his own father this week, explained his decision to donate his World Cup-winning bonus to the seriously ill kids, saying:

“We had the idea to help 23 children, because we had 23 players in the squad. And they underwent surgery, which was successful. I am very thankful. The doctors did a great job. I am very happy because it goes well for the children.”

The former Real Madrid playmaker has come under fire from many sections of the UK media for apparently not showing enough heart on the football pitch with Arsenal. However, no-one can accuse the 26-year-old of lacking heart when it comes to helping those rather less fortunate than himself.

Other winners on the night at the Laureus awards were swimmer Missy Franklin and F1 world champion Sebastian Vettel, who won the sportswoman and sportsman of the years awards and Bayern Munich who were named team of the year.