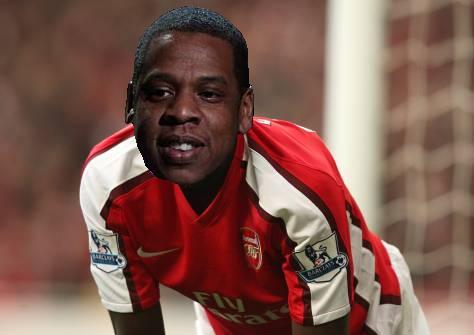 American rap superstar Jay-Z has revealed that he is considering plunging some of his $500 million (approx. £330 million) fortune into Arsenal football club.

Jay-Z (real name Shawn Carter) already owns a part-stake in NBA outfit New Jersey Nets and has admitted that if the opportunity arises  – and the price is right –  he may not be able to pass up the chance to invest in The Gunners;

“[I started supporting Arsenal] when Thierry Henry was at the club. I just thought he was an amazing player. Ever since then I have been a big fan of the club and still today you play the beautiful football that Thierry did. I think he had a real long term-effect on the team.

I don’t know a lot about the business of soccer, but in the future if the right opportunity presented itself, then who knows? I am a businessman, and I will always look at an opportunity, and if it feels right, great.”

It seems that owning a London-based ‘soccer’ team has become the in-thing with multi-millionaire rappers at the moment, as the news comes just days after rapper P-Diddy was linked with a takeover at Crystal Palace.