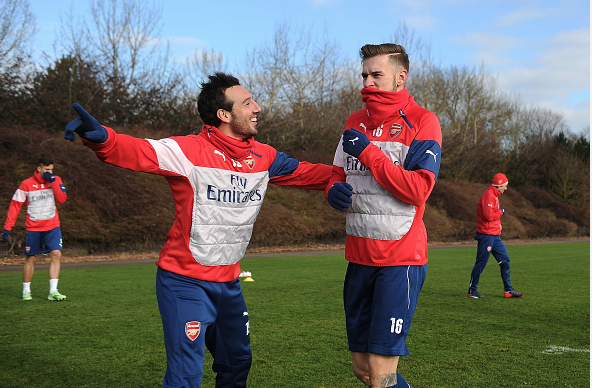 One day on from news that Barcelona are lining up a £50million bid for Arsenal’s Aaron Ramsey, the player is talking about his role in Arsene Wenger’s team. He’s not happy playing out wide.

He tells the Sun:

“The manager has said he wants me to do a job out wide for the moment and obviously I’ll do that for him. But we have wingers on the bench and he’s still been picking me out wide.”

He’s right, of course. Ramsey can be sublime in a more central position. But why isn’t he playing there?

“Santi Cazorla is playing in my position at the moment. He is the one who plays alongside Francis Coquelin and tries to get forward. I’m trying to get that position back.. I like to start from a defensive position and drive the team forward with little one-two passes around the opposition.

“It’s harder to get involved when you’re on the wing and that’s why I don’t really enjoy playing out there… at the moment I’m relying on other players to get me into the game.”

Meanwhile, Theo Walcott – a winger by trade – looks on wanders how he can usurp Ramsey.

Wenger’s got a tough job keeping them all happy.