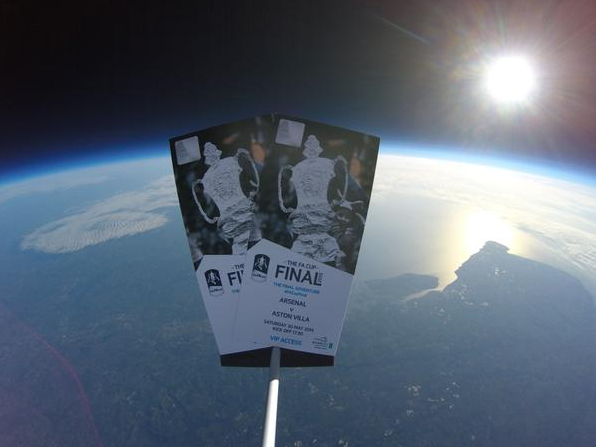 An Arsenal fan by the name of George Lamb will be attending this Sunday’s FA Cup Final against Aston Villa at Wembley after stumbling across match tickets that had quite literally fallen from space.

The FA fastened a pair of VIP passes to a weather balloon and set it soaring at 6:00am this morning, with the balloon reaching a height of some 8,839 metres (that’s 29,000 feet in old money) before popping…

They then plummeted back down to Earth and landed some 45 miles on down the road in the village of Broad Oak in Sussex, where George’s grandmother duly happened across them.

She reported her find to her 19-year-old grandson, who was suitably beaming by the time he subsequently told the FA’s website:

“When I woke up this morning the idea of going to the FA Cup final hadn’t crossed my mind.

“This will be my first time to Wembley and I’ve got butterflies at the prospect of it.”