The arrival of Petr Cech at Arsenal was supposed to provide the Gunners with the defensive solidity needed to win a title. However, in Sunday’s Premier League opener against West Ham, Arsenal flopped badly with Cech himself at fault for both the Hammers’ goals. 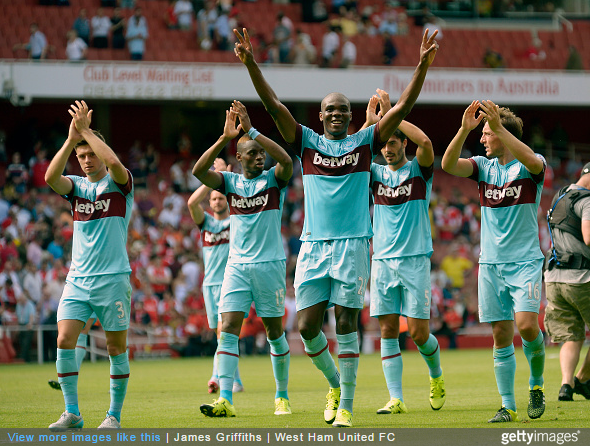 Aaron Ramsey then went close with a deflected effort, although the Gunners struggled to create many decent chances against a well-drilled Hammers defence.

Making his debut for the Hammers at just 16, central midfielder Reece Oxford was cool, calm and collected throughout.

Just before the break, Slaven Bilic’s side took the lead agains the run of play, with an unchallenged Cheikhou Kouyaté heading home Dimitri Payet’s free-kick, with Cech getting nowhere the ball despite rushing off his line.

In the second period, Oliver Giroud forced a save from Adrian as the home side pushed for an equaliser.

However, West Ham were always a threat on the break, with the outstanding Payet a thorn in the Gunners’ side.

Then, just before the hour-mark, it was 2-0, when Mauro Zarate fired home after poor play from Oxlade-Chamberlain. The shot seemed to catch Cech totally off guard, with the former Chelsea man left badly wrong-footed.

Theo Walcott was sent on before Alexis Sanchez, clearly lacking sharpness, entered the fray. But for all their huffing and puffing, it was a familiar story for the Gunners, with little in the way of proper chances created.

The game ended with a plethroa of empty seats and a number of ‘boos’ from home fans tired of the same old story. While Arsenal looked disappointingly familiar, Bilic’s West Ham were snappy and creative and looked a long way off Sam Allardyce’s workmanlike outfit from last season.