Arsenal bounced back from their shock opening day defeat to West Ham by battling to a much-needed three points at Selhurst Park. 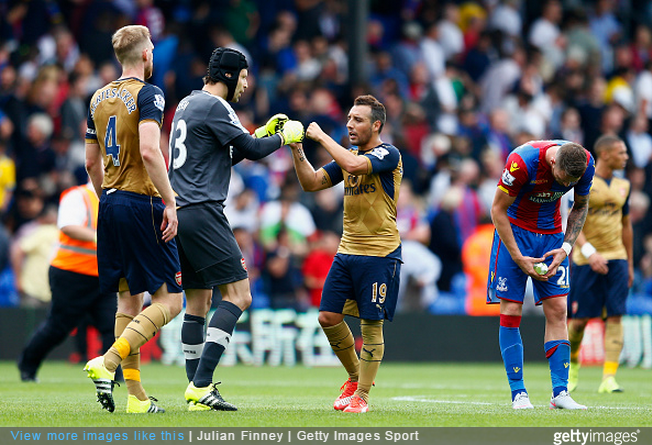 The Gunners, with Santi Cazorla back in tandem with Francis Coquelin in the heart of midfield, started brightly, with Mesut Ozil pulling the strings in midfield.

Alexis Sanchez went close early on, with  James McArthur clearing the Chilean’s effort off the line.

The goal eventually came for the visitors, with Olivier Giroud producing a superb volley from an Ozil centre.

The second goal wouldn’t come for Arsenal, despite more fine attacking play and just before the half-hour mark, the Eagles drew level. Joel Ward was the goal-scorer for the hosts, firing a fizzing effort past Petr Cech in the Gunners’ goal.

Just before the break, the combative Coquelin was lucky not be shown a second yellow, with referee Lee Mason opting to keep his cards in his pocket.

In the second period, Connor Wickham hit the crossbar for the hosts who pushed hard for an equaliser.

However, on 55 minutes, Sanchez rose superbly to head towards goal, only for Damien Delaney to slice the ball into his own net.

Palace had chances to draw level once again as the half progressed but ultimately it was Arsene Wenger and co. who would come away from Selhurst Park with a welcome three points.

Crystal Palace vs Arsenal 1-2 All Goals and… by GriseldaOcasio