Arsenal outclassed Stoke City at the Emirates on Saturday, with strikers Theo Walcott and Olivier Giroud both getting on the scoresheet for the Gunners. 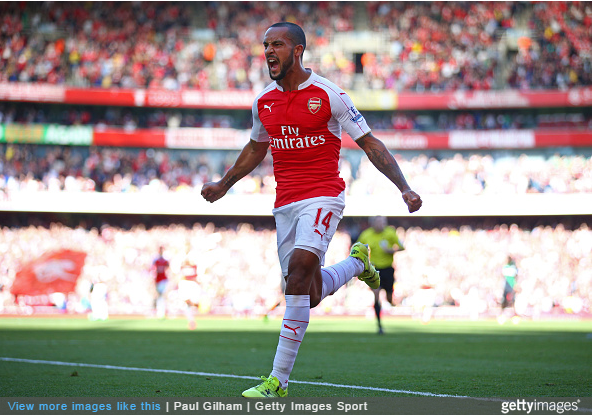 The hosts, with Walcott up front and Giroud on the bench, were quick off the blocks, immediately threatening the Stoke goal.

Alexis Sanchez and Walcott both went close early on, with Potters’ ‘keeper Jack Butland keeping his side in the game.

Eventually the goal did come on the half-hour mark. Francis Coquelin was the instigator for the home side, with his sliding tackle allowing Mesut Ozil to measure a sublime long pass to Walcott, who fired past man of the match Butland.

Özil with a perfect long-ball to find Walcott. The German gets his second Premier League assist in the season. pic.twitter.com/D99DATKTjX

However, the Gunners got their second wind with their finishing, once again, letting them down time and time again. Sub Olivier Giroud was guilty of one howler, from just eight yards with only Butland to beat.

The Frenchman did, however, get his goal late on, nodding home a fine Santi Cazorla free-kick to seal a win which could and probably should have ended at least 5-0 to the north Londoners.

The win sees Arsenal go second, although the Gunners’ failure to put away enough of their chances continues to be an issue. As for Mark Hughes’ Stoke, their awful start to the season continues. Despite some big transfers in the summer, the Potters remain rooted to the bottom of the table, with just points from five games.