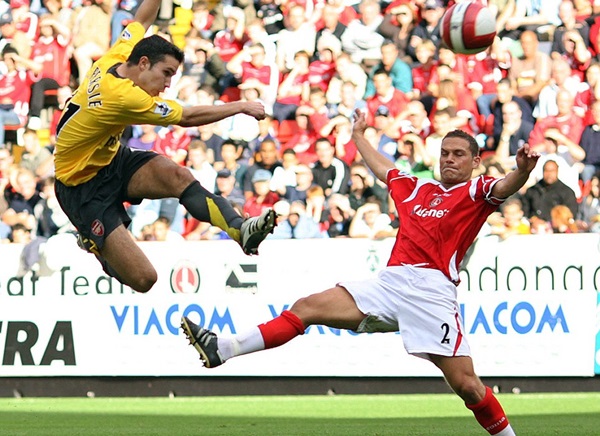 Early in the 2006/07 season the fixture calendar took Arsenal back to their south east London roots with a visit to the Valley, home of Charlton Athletic. It was to prove a very good day indeed for Mr Robin van Persie.

Just before half-time Van Persie scored to cancel out Darren Bent’s opener and then, four minutes after the restart, the Dutchman went one better – sending an absolute pearler flying into the Charlton net to put the Gunners 2-1 ahead.

Alex Hleb sent Emmanuel Eboue down the right and the Arsenal right-back sent a cross looping into the centre. Van Persie arrived at the edge of the area, galloped through a gap in the Charlton centre-backs and leapt into the air to crash a spectacular volley home past Scott Carson.

Arsene Wenger called it “the goal of a lifetime” in the immediate aftermath, and it’s really not hard to see why…

Stunning. It really does get better with age.