Alexis Sanchez rediscovered his shooting boots, with the Chilean bagging a hat-trick as Arsenal ended Leicester’s unbeaten start to the season on Saturday. 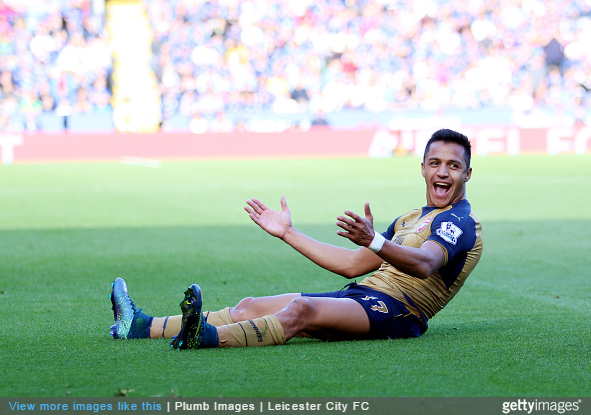 Both sides started brightly, but it was the Foxes who scored first, with Jamie Vardy firing home from a tight angle after the home side counter-attacked with pace.

Just five minutes, however, the Gunners were level. Theo Walcott was the scorer for the visitors, courtesy of a net left-foot finish after a fine pass from Santi Cazorla.

Mathieu Flamini had been rewarded for his match-winning brace against Spurs in midweek with a starting berth in midfield for the Gunners. However, injury ended the Frenchman’s involvement after just 21 minutes, with Mikel Arteta taking his place.

The game stayed open, with chances at both ends. But just after the half-hour mark, Arsenal scored again. After failing to find the net in any competition for the Gunners this season, Sanchez finally broke his duck, courtesy of a close-range finish.

The goal opened the floodgates for the Chilean, who scored again on 57 minutes, this time with a header from a deft Mesut Ozil pass.

Sanchez’s third came on 81 minutes, with the former Barcelona sending a superbly-struck effort past Kasper Schmeichel in the Leicester goal.

Sanchez with a wonder goal to complete his hat trick. Good to see him getting back in form. pic.twitter.com/Bu95akYcs7

For the hosts, Vardy always looked a threat on the break, and the attacker netted his second of the game, via a fine effort after Petr Cech had saved well from Andrej Kramaric.

There was still time for a seventh goal of the game, which came courtesy of a close-range Olivier Giroud shot from a Nacho Monreal centre.