At the Emirates on Tuesday night, Arsenal produced the most Arsenal of performances imaginable, with loads of possession, embarrassing defending, injury to a key player (Laurent Koscielny), chances fluffed, and the obligatory goal conceded soon after scoring. It was there for all to see, as it has been so many times over the years, as Olympiakos secured their first-ever win on English soil. 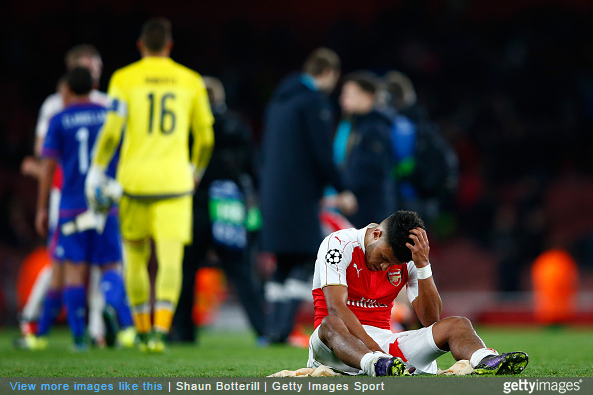 The Gunners had the first decent chance of the game on 10 minutes, when Alexis Sanchez set up Alex Oxlade-Chamberlain after a lightning-quick break, only for the England winger to hit the side netting.

Soon after, Sanchez then set up Theo Walcott, who could only produce a tame effort straight at ‘keeper Roberto.

After that brief spell of energy from the hosts, Olympiakos started to grow into the game and eventually the Greeks took the lead after some poor Gunners defending. A lack of communication between Laurent Koscielny and Gabriel lead to a corner for the visitors, and from the resulting ball hit to the edge of the box, an unmarked Felipe Pardo fired home, via a wicked deflection off Oxlade-Chamberlain.

However, soon after conceding, the Gunners levelled the scores, with Walcott firing home, albeit after some dismal goalkeeping from Roberto.

But that wasn’t the end of the goals in the first-half, with David Ospina, in for Petr Cech, totally misjudging a corner into the box, with the backpedaling Colombian dropping the ball behind the line. The decision was given by the official behind the goal, something you don’t see often. However, overall, this was classic Arsenal.

Not long after the break, an injured Laurent Koscielny was replaced by Per Mertesacker. Then, with Arsenal struggling to break down a well-organised Olympiakos, Arsene Wenger then sent on Aaron Ramsey for anchorman Francis Coquelin. Ramsey’s impact was immediate, with the Welshman setting up Sanchez who teed up Per Mertesacker, with the German’s shot brilliantly saved by Roberto before Santi Cazorla’s follow-up was headed off the line.

The equaliser eventually came for the Gunners, with Sanchez heading home after a chipped pass from Walcott.

Yet, in trademark style, the hosts could only keep the scores at 2-2 for 59 seconds, with Icelandic international Alfred Finnbogason scoring after more brittle defending from Arsenal.

The north Londoners pushed for yet another equaliser, with a Mesut Ozil free-kick forcing Roberto into a decent save.

Late on Sanchez went close with a header before Joel Campbell, who enjoyed a successful loan spell with Olympiakos, came on for Hector Bellerin.

However, ultimately it would end in more Euro-misery for Arsenal, who have no points from their opening two games of Group F with back-to-back clashes with Bayern Munich next up. The north Londoners now have a seriously big mountain to climb.