Late goals from Olivier Giroud and Mesut Ozil secured a precious home win for Arsenal against Bayern Munich on Tuesday night, a result which revitalises the Gunners’ Champions League campaign. 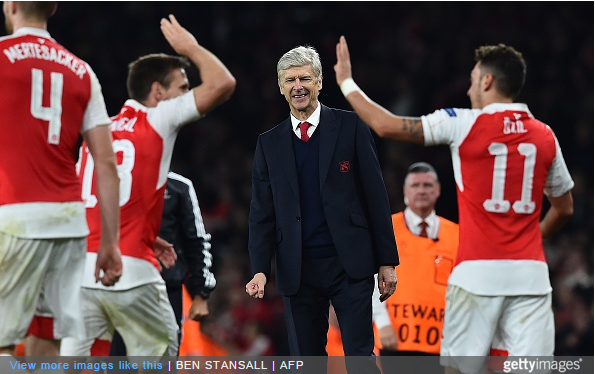 Petr Cech was back in goal for the hosts and the former Chelsea man was superb throughout, saving from Arturo Vidal and Robert Lewandowski among others.

Theo Walcott had the best chance of the game in the first-half for the Gunners, with the striker’s header forcing Manuel Neuer into a superb save from close-range.

After the break, the Germans, who had dominated possession in the first-half, started to push for a goal. However, Arsenal stood firm and defended superbly.

Then on 77 minutes, a Santi Cazorla free-kick into the Bayern box left Neuer uncharacteristically flapping, with sub Giroud bundling the ball home.

Things got even better for Arsene Wenger’s side at the death, with Hector Bellerin setting up Ozil, who fired home. Initially it looked at though Neuer had pawed the ball out but the officials deemed (correctly) the ball to have crossed the line.

A fabulous night in north London for Arsenal would’ve been made even better that Dinamo Zagreb managed to draw with Olympiakos in Croatia. However, a late Brown Ideye goal means that the Gunners still have it all to do in Group F. However, the victory will surely give the Premier League side a huge boost both domestically and in Europe.