At a rain-soaked Emirates Stadium on Saturday evening, Arsenal battled to a 2-1 win against Everton to move top of the Premier League table, at least for one day. 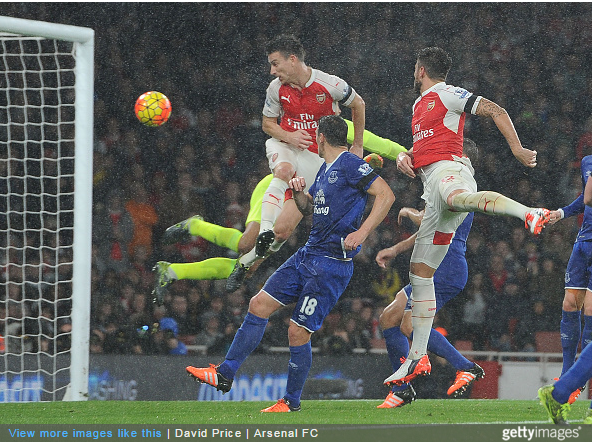 Arsene Wenger rested Theo Walcott, with Olivier Giroud starting in attack while Alex Oxlade-Chamberlain filled in for the injured Aaron Ramsey on the right-flank. However, early on, neither side able to stamp their authority on the game.

Mesut Ozil has been in fine form this season and on 36 minutes, the German schemer chipped an exquisite pass to Olivier Giroud, who headed past Tim Howard and into the Everton goal.

However, just before the break, the visitors get themselves back into the game. Oxlade-Chamberlain lost possession of the ball on the edge of the Toffees’ box, and after a fine break, Ross Barkley saw his shot deflected off Gabriel and past Petr Cech into the net.

In the second-half, both sides had chances to score, with Giroud’s left-foot effort coming back off the bar.

Romelu Lukaku also hit the bar with a header as the visitors pushed for an equaliser.

Gerard Deulofeu then forced a good save out of Petr Cech as the hosts tired.

Late on, Mesut Ozil hit the frame of the goal in an enthralling second-period.

Everton’s chances of nabbing a late leveller were all but put to bed when Gareth Barry was sent off for a second yellow after a foul on sub Kieran Gibbs and that was that.

Arsenal continue their fine run of form, with the win seeing them leapfrog Manchester City into top-spot in the table. As for Everton, they stay 10th.