Arsenal were thoroughly outclassed by Bayern Munich at the Allianz Arena, with the Gunners going down 5-1, a result which sees them needing two wins (including one by a two-goal margin) to secure their place in the last 16 of the competition. 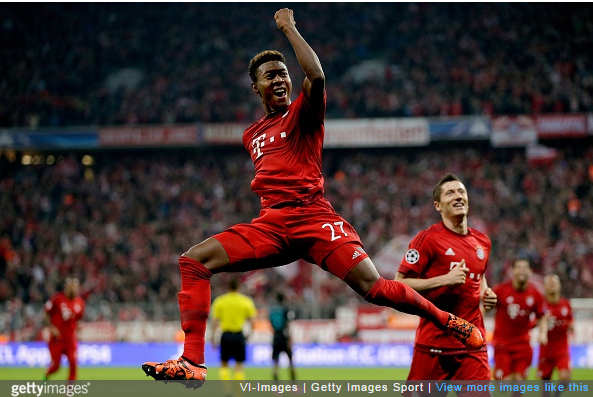 Despite apparently being fit to play, centre-half Laurent Koscielny was left on the bench for the Gunners, with Gabriel taking his place. Mathieu Debuchy stood in for the injured Hector Bellerin with Joel Campbell retaining his place on the right-flank.

Bayern were quick out of the blocks and dominated from the start, with an opening goal looking inevitable. And on 10 minutes it came, with Thiago Alcantara given far too much time and space and pick out Robert Lewandowski, after Gabriel had tried to play offside. The Pole, not surprisingly, took his chance courtesy of a header past Petr Cech.

On a rare foray forwards, Arsenal thought they had scored, only for Mesut Ozil, who was one bright spark for the Gunners, penalised by the officials for directing the ball in with the top of his arm.

Soon after Thomas Muller made it 2-0, with his close-range shot helped in by a slight deflection from Per Mertesacker.

The visitors were struggling to keep up with Bayern’s superb movement and eventually went 3-0 down just before the break, with David Alaba all too easily dispossessing Santi Cazorla before producing a superb long-range strike.

Alaba’s with a worldie vs Arsenal Download this classs FREE app to watch every goal in HD! https://t.co/6UjmVvwfY1 pic.twitter.com/mdURjbJ7ec

Despite Bayern’s silky dominance, former Liverpool anchorman Xabi Alonso did do this….

Xabi Alonso takes one of the worst corners of all time pic.twitter.com/e4liickmk9

Soon after the re-start, things got even worse for Arsene Wenger’s charges, with sub Arjen Robben making it 4-1.

In-form striker Olivier Giroud did get one back for the Gunners, via a fine volley.

However, Muller netted his second of the game on 89 minutes to send Arsenal to their joint-worst Euro-defeat ever.

Six points behind second-place Olympiakos in Group F, Arsenal now need to beat Dinamo Zagreb at home and Olympiakos away (by at least two goals) and hope Bayern beat the Greeks when they meet. A big ask but still quite doable in reality, despite the dismal CL campaign for the north Londoners so far. Although a trademark heroic failure in Greece does seem a tad more ‘Arsenal’, doesn’t it?