Arsenal kept alive their hopes of making it through to the knockout stages of the Champions League courtesy of a comfortable and impressive 3-0 win at home to Dinamo Zagreb. 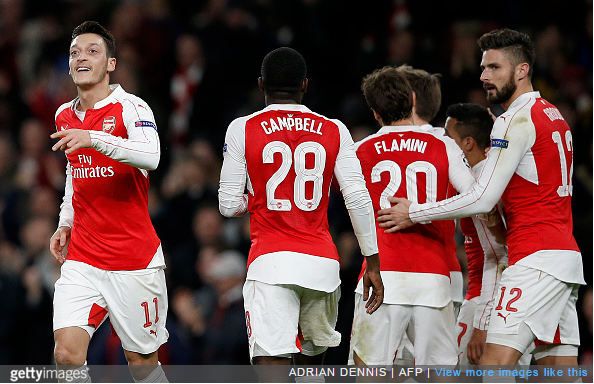 Mesut Ozil was outstanding throughout and it was the German who opened the scoring just after the half-hour mark, heading home from an Alexis Sanchez cross. The Gunners, with Mathieu Flamini in to replace the injured Francis Coquelin in central midfield, totally dominated and were 2-0 up soon after, with Sanchez neatly finishing from close-range after good work from Nacho Monreal.

After the break, the Gunners continued to boss the game and they eventually netted their third of the night, with Sanchez latching on to a fine Joel Campbell pass before rounding ‘keeper Eduardo and firing home. The game opened up late on, with Zagreb carrying more of a goal threat following the introduction of El Arbi Hillel Soudani. Petr Cech was forced into a couple of good saves while at the other end, Ozil almost scored his second of the game with a back-header which went just wide.

The game also saw the welcome return of Aaron Ramsey, who came on in the second-period and looked lively. Ultimately, the game would end in a deserved 3-0 win for the north Londoners, which sets up a winner-takes-all away clash with Olympiakos in two weeks’ time.