Arsenal battled their way to a vital win against Sunderland at the Emirates on Saturday, after the visitors produced an impressive display which arguably merited a share of the point. 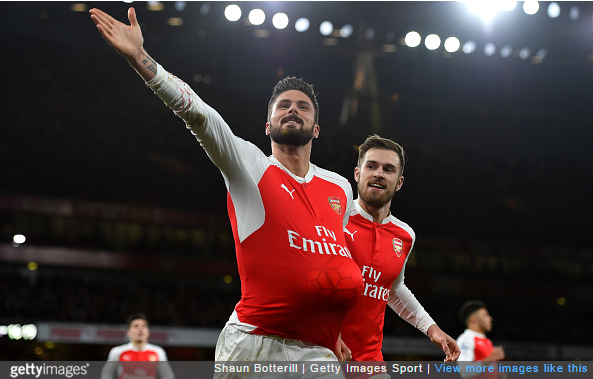 Shorn of key performers such as Alexis Sanchez, Santi Cazorla and Francis Coquelin, the Gunners struggled to click into gear in the first-half. Indeed, Petr Cech was forced into a couple of fine first-half saves as the Black Cats pushed for a goal. However, the hosts eventually took the lead when Mesut Ozil produced yet another superb through-ball which set up Joel Campbell, with the Costa Rican firing past Costel Pantilimon. Arsenal’s lead would only last for 12 minutes, with Olivier Giroud putting through his own net after a Yann M’Vila cross.

Sam Allardyce’s side continued to impress in the second-period, with Duncan Watmore shining in attack and Cech again saving the day for the hosts. Yet it was the Gunners who’d find the back of the net again, when Giroud made amends for his own-goal courtesy of a header from an Aaron Ramsey pass. The Welshman, back in a central midfield berth, sealed the deal for the north Londoners at the death, netting from close-range to secure a precious three points for his side.

Arsenal go second, a point ahead of Manchester City and two points behind surprise leaders Leicester. As for the Black Cats, they’ll be buoyed by another fine display.