Arsenal moved to withing two points of league leaders Leicester City, after a hard-fought but overall deserved win against fellow title-chasers Manchester City at the Emirates on Monday night. 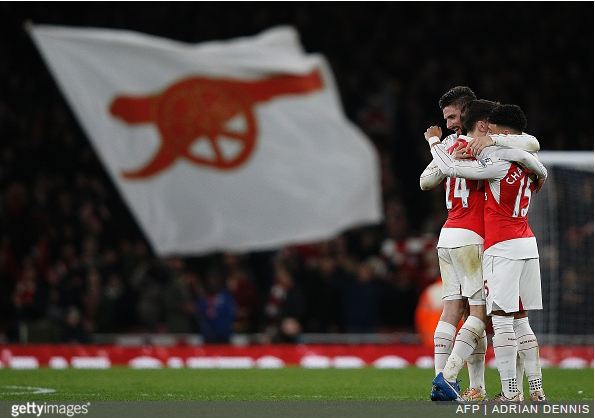 The visitors, with Sergio Aguero leading the line, started well. However, just after the half-hour mark, Kevin De Bruyne squandered a great opportunity, choosing to shoot (wide) instead of feeding the better place David Silva. Soon after, the Gunners took the lead, with Mesut Ozil feeding Theo Walcott, who produced an outstanding curling effort which flew past Joe Hart in the City goal. The hosts pushed for a second and it came just before the break, after a dreadful pass from Eliaquim Mangala eventually saw Ozil again set up Olivier Giroud, with the Frenchman firing home between Hart’s legs.

After the break, the Gunners had a number of chances to increase their lead, with Joel Campbell and Aaron Ramsey in particular fluffing their lines in front of goal. However, the Citizens rallied late on, with Jesus Navas failing to make the most of a good break. Manuel Pellegrini’s side did eventually get one back, via an outstanding side-footed effort from Yaya Touré, who had seen most of the game pass him by. The Gunners looked nervy and Touré almost notched an equaliser at the death, but in the end the hosts would hold on to secure a very precious win.

The win sees Arsene Wenger’s men go two points behind shock leaders Leicester, with the Gunners now many people’s favourites to end their Premier League trophy drought and lift the title in May. As for City, without Vincent Kompany they continue to look far too vulnerable at the back. Still, only four points back from Arsenal, the Mancunian giants will no doubt push Arsenal and Leicester all the way to the end of the season.