Arsenal put their St. Mary’s horror show behind them and returned to the top of the Premier League, courtesy of an impressive 2-0 win against Bournemouth at the Emirates. 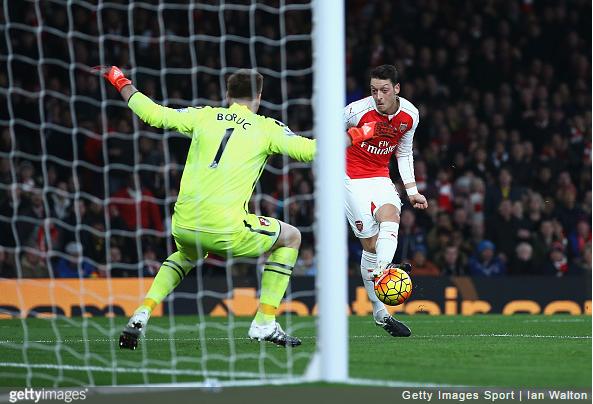 The hosts, with Calum Chambers in midfield and Kieran Gibbs in at left-back, started nervously but eventually found their stride, with Mesut Ozil at the heart of everything good for the Gunners. Gabriel, in for the rested Laurent Koscielny, headed home the opener from a corner on 27 minutes, with Ozil adding to his burgeoning list of assists. Per Mertesacker the missed a sitter after another Gabriel header hit the post as Bournemouth struggled to deal with their hosts’ set-pieces.

In the second period, Arsenal continued to dominate, with Ozil netting a delightful second, just after the hour-mark, after superb interplay with Olivier Giroud. The Cherries did their best to fight back and still carried a threat in attack. However, in the end they were outplayed by a Gunners’ side with their eye firmly on the title.

As well as putting Arsenal back on top, at least until tomorrow, the result saw Petr Cech claim the Premier League record for clean sheets outright for himself, courtesy of his 170th shut-out. As for Eddie Howe’s Bournemouth, they find themselves 16th, three points clear of the drop-zone.