A player with the potential to be one of best midfielders in world football, Abou Diaby saw his career destroyed by a never-ending stream of injuries while at Arsenal.

A move to Marseille last summer hinted at a return to the big time for the leggy midfielder and on Friday night, the resilient 29-year-old finally made his comeback against Rennes.

Diaby appeared as a late sub for L’OM in a game which saw the French giants suffer an embarrassing 5-2 home defeat.

However, for the former Gunner, it was a momentous occasion, coming a year and a half after his last first team outing, in the Capital One Cup against Southampton in September 2014.

Indeed, Diaby’s cameo appearance against Rennes was only his third senior game in the past three seasons.

Not surprisingly, he received a generous welcome from the Stade Velodrome fans, despite the scoreline…

A player blessed with a fine physique, superb touch and ability to drive forward, Diaby should currently be the lynchpin in France’s midfield.

Sadly, since that infamous tackle from Sunderland’s Dan Smith in May 2006, the Frenchman’s career has been decimated by injury (a reported 42 of them just at Arsenal).

This list, via Talksport, of his various ailments while in England is staggering… 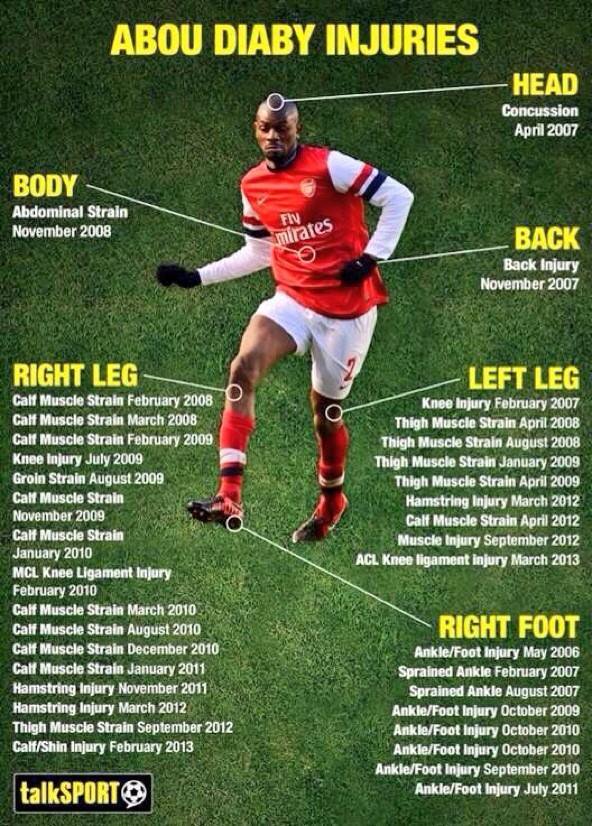 Let’s hope that this isn’t yet another false dawn and that Diaby can now finally get a run of games under his belt and rediscover has least some of his undoubted talent.

At 29 years of age, there is still time for the gangly star to make an impact at the top end of the game.