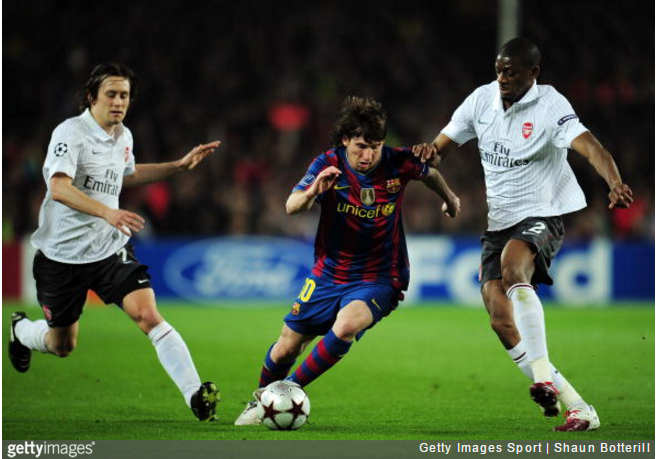 Try picking Lionel Messi’s finest hour and you’ll find yourself spoiled for choice. That said, his four-goal masterclass against Arsenal at the Nou Camp on 6th April 201o is surely a strong contender.

The first leg of the Champions League tie had been drawn 2-2, and when Niklas Bendtner – yes, you read that correctly – popped up to put the Gunners ahead in the 19th minute, things took a rosy sheen for the Premier League side. Enter Messi.

Barca’s little magician wasted no time getting into his diminutive stride. Two minutes after Bendtner’s goal, Messi latched on to his own botched through-ball to wallop an equaliser past the helpless Manuel Almunia.

He then both began and put the finishing touch to a slick passing move to score his second with 37 minutes on the clock, before completing his hat-trick a couple of minutes before half-time with a beautiful little lob to round off a devastating 20-minute turnaround.

Messi then had to wait until the 88th minute to complete his haul, jinking through a totally bewildered Arsenal back four before sticking a low shot through Almunia’s legs from a tight angle.

Look away now, Gooners. Those four goals are here for everyone else to enjoy once again…