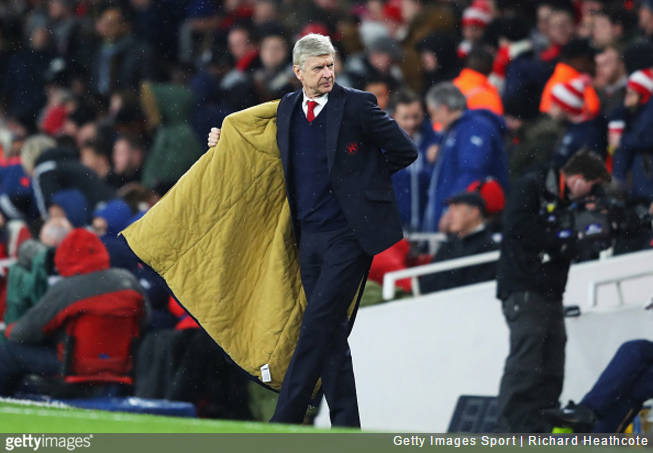 If there’s one thing you could never accuse Pies of, it’s shirking the big stories.

Last night saw Arsenal’s younglings take on their Man City counterparts in the semi-final of the FA Youth Cup.

As you’d expect, several of Arsenal’s senior staff members were in attendance to keep a beady eye out for potential rising stars.

Arsene Wenger made it along, though raised a few quizzical eyebrows by doing so while wearing his old Nike jacket…

Wenger is also at the Emirates. #Arsenal pic.twitter.com/Wk8mmJEsyS

Being a televised game and all, word quickly disseminated that Puma might not be too happy with Arsenal’s manager being sat in the stands sporting the marque of one of their major rivals – especially having paid £170million to sponsor the Gunners’ gear a couple of years ago.

Sure enough, when the teams emerged for the second half, Wenger has swapped into a nice plush Puma jacket to see out the evening in…

The all-pervading power of sponsors in action. A grown man unable to wear the coat of his choosing.

And yes, before you ask, it is a crippling slow news day.