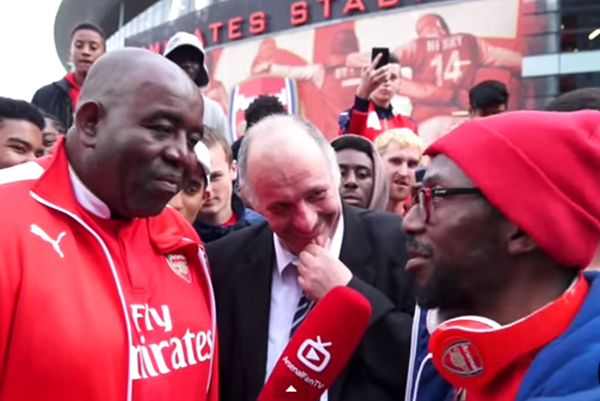 Arsenal fans have a deserved reputation for being just a *little* bit cringey. If they’re not screaming “WENGER OUT!” after not scoring in the first 15 seconds of a game, then the continued presence of Arsenal Fan TV is certain to provide you with enough painfully induced squirms to keep you going for several days.

One of the YouTube channel’s regular contributors – a fan known as Ty – is “well-known” for clashing with other Arsenal fans in what are essentially middle class appropriations of rap battles outside football grounds up and down the country.

Well, our man Ty trumped himself yesterday during Arsenal’s scintillating 3-3 draw with West Ham at the Boleyn Ground on Saturday afternoon after conducting a one-sided argument with a Hammers’ mascot – a person inside a giant teddy bear costume.

As the mascot paraded in front of the away supporters with some light-hearted waves, Ty took the bait and leapt to his feet, asking the cuddly creature “Why don’t you do that when you play Millwall?”, his voice seeming to crack with emotion.

The bear responded by simulating being bent over double and laughing (there’s a sentence you probably didn’t think you’d see on a Monday afternoon…), mirroring scores of other football fans across the country.

Rumours that Wenger is pondering on slapping in a multi-million pound bid for the furry fomenter are as yet unfounded.

Still, they could do a lot worse at the moment…