Once of Arsenal, where his inconsistent performances frustrated the (perenially frustrated) Gunners faithful, Gervinho now finds himself plying his trade in the newly moneyed Chinese Super League. However, at the weekend, the Ivorian stood out for all the wrong reasons, courtesy of a shocking challenge. 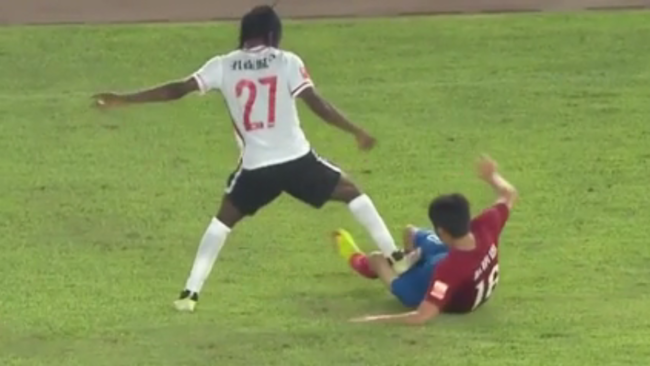 With his side, Hebei CFFC, 1-0 down against Henan Jianye FC 1-0 against  and just 11 minutes to go, Gervinho lost possession on the left wing. But with the defender on the ground, the former Roma man tried to recover the ball from between his opponent’s legs in a rather unsubtle manner, stamping not once, but twice, on an opponent after losing the ball…

Right in the knackers!

Needless to say the 29-year-old Gervinho saw red over the ridiculous pair of challenges, although he may have got at least part of the ball with the second one.

Hebei CFFC went on to lose the game 1-0, while the former Roma man will now face a ban.