Arsenal secured their place in the last 16 of the Champions League courtesy of a hard-fought win away to Ludogorets Razgrad.

After going two goals down within the first 15 minutes, the Gunners fought back courtesy of goals from Granit Xhaka and Olivier Giroud before a Mesut Ozi stunner won the game for the visitors. 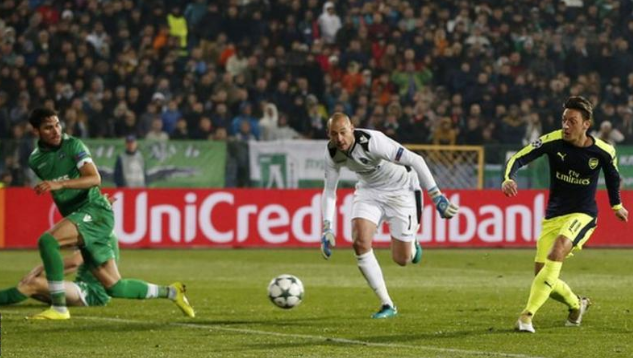 Ozil has added more goals to his game this season and on 87 minutes in Sofia, the German schemer made it seven for the campaign with a beautiful solo effort.

Running beyond the Ludogorets defence, Ozil deftly knocked the ball over the onrushing goalkeeper before selling sublime dummies to two opposition defenders and ultimately slotting the ball home…

Omds the Ozil goal from this angle makes it look 100 times better 😂😂😂 pic.twitter.com/R0ht7ru523

The victory sees Arsene Wenger’s men once again make it out of the Group stages of the competition, with the north Londoners leading Group A via a superior goal difference to that of PSG.

Will this be the season that Arsenal secure that precious top spot at the end of the group stages and thus dodge a European giant in the last 16?