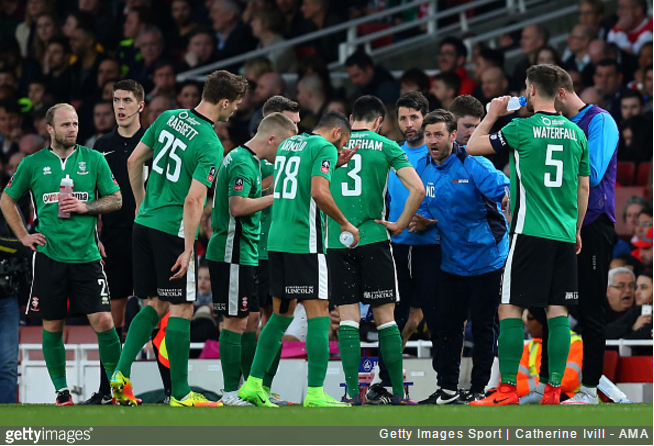 “Right, I’ll do the high dusting – Waterfall, you fetch the mop….”

Lincoln City earned themselves a lot of admirers for the way in which they held their own against Arsenal in the FA Cup, especially in the early knockings of the quarter-final match.

Sadly, the Imps’ tremendous cup run came to an end with a 5-0 defeat at the Emirates, but the National League side still found time to clean up after themselves after the final whistle.

Despite being well and truly exhausted, the entire Lincoln team rallied together to tidy up their dressing room, sweeping the floors, collecting discarded water bottles and even requesting a vacuum cleaner to finish the job.

However, as subsequently revealed by manager Danny Cowley, it’s not as though his side were giving their famous Premier League hosts any preferential treatment:

We always clean the dressing room wherever we go.

We conceded at Braintree last season — a terrible goal in a pivotal game for us — and ended up drawing 1-1 but we still swept up.

Indeed, it’s a code of conduct that Cowley adopted from the New Zealand rugby team:

We always make sure we clean up and leave the changing room as we found it.

Bloody hell Lincoln, you’re making it impossible not to love you.