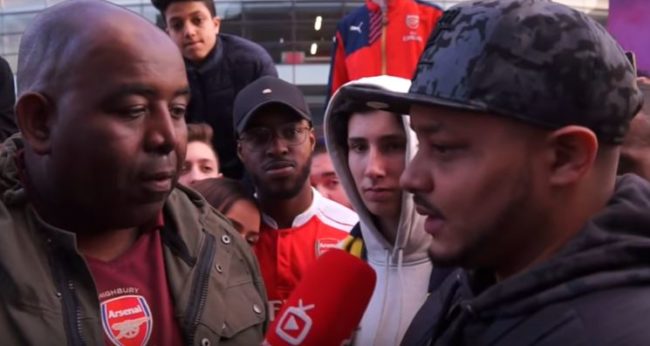 Arsenal Fan TV’s infamous post-match interviews have become, for better or for worse, one of the more entertaining by-products of the modern footballing world.

However, it seems that the channel’s hunger for cheap outrage is starting to push some Arsenal fans over the edge, with a number of unimpressed Gooners deciding to attack main man Robbie and his cohorts outside the Emirates on Sunday.

After the entertaining 2-2 draw with Man City, the Arsenal Fan TV crew were filming their trademark nonsense when a number of irate fans got physical…

Arsenal Fan TV getting started on outside the Emirates…

Arsenal fans trying to get at Robbie from Arsenal Fan TV outside the Emirates earlier today. 😨 pic.twitter.com/4WE1ADsPIK

To be fair, a reaction like that has been coming, with the majority of Arsenal fans embarrassed by the regular characters on the channel as the rest of the footballing world looks on, chuckling away.

However, the irony of angry fans attacking Arsenal Fan TV for being embarrassing is quite incredible. And we’re sure Robbie is delighted at the extra publicity it will give the channel.

One wonders what the reaction will be when Arsene Wenger announces he’s signed that new contract just as Alexis Sanchez leaves for Chelsea!