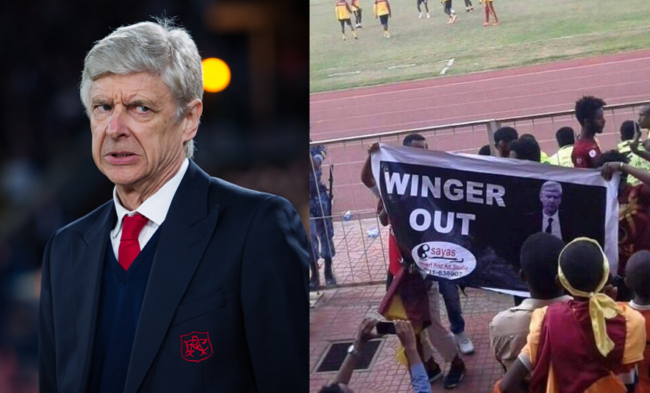 Not so very long ago, with the ‘Wenger Out’ campaign at full bonk, one particular protest banner went viral after it was unfurled at an Ethiopian football match.

This was because it appeared to feature not one, but two of the internet’s twin obsessions, namely Arsene Wenger and a bonus spelling mistake.

However, according to the man responsible, it would appear that the banner wasn’t printed in error, nor was it a call for Theo Walcott to be ousted from the Arsenal squad.

Indeed, local artist Tadele Roba has claimed that the ‘mistake’ was in fact a deliberate ruse to garner more attention from around the world.

Artist Tadele Roba told local radio he is the one responsible for the “Winger Out” banner that went viral. Says misspelling was intentional! pic.twitter.com/4cOaOZktaq

The typo on Wenger made #Ethiopia the butt of endless jokes last weekend. But Tadele says misspelling was done on purpose to grab attention!

He could have been a bit more creative with his lying. What a joke. We haven’t been this laughed at since the Robel Kiros affair.

Tadele Roba has the maturity level of a twelve year old. For him to go on radio and say this…I would have just kept my mouth shut.

Yeah, in all honesty, we’re not entirely certain we believe him either – though it would take a special kind of berk to get 50% of the words wrong in a two-word protest slogan.