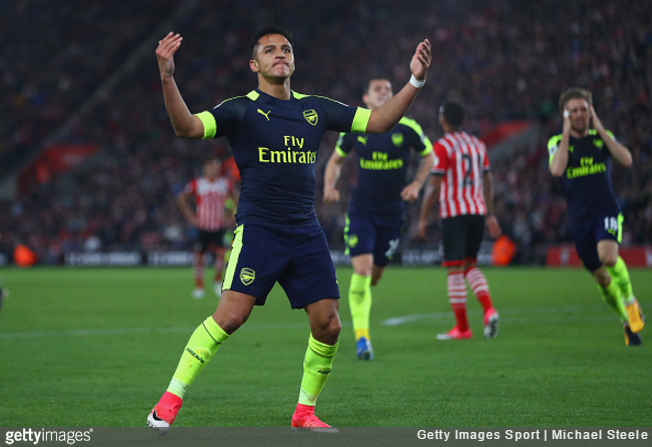 Arsenal kept their hopes of washing up inside the top four alive with a routine 2-0 away win over Southampton on Wednesday evening.

After a frankly turgid first half of little consequence, it took a flash of inspiration from Alexis Sanchez to jump-start the match into life on the hour mark.

Collecting a pass from Mesut Ozil with his back to goal, the Chilean promptly swivelled and left two Saints defenders on their backsides before slotting a low finish past Fraser Forster…

With that, Sanchez became the first Arsenal player since Robin van Persie in 2011/12 to reach 20 league goals in one season.

As Southampton continued to fail to mount any serious threat, the visitors wrapped up the victory in the 83rd minute when substitute Olivier Giroud found himself unmarked to head home Aaron Ramsey’s centre…

That’s how it ended at St. Mary’s, with Arsenal moving up into fifth place as a result, three points behind Man City in fourth and four points behind Liverpool in third.

Bet365 is offering favourable odds on the Gunners usurping Pep Guardiola’s side, largely as their run-in doesn’t look overly taxing and Liverpool aren’t exactly a model of consistency.

Basically, if Arsene Wenger’s merry men can beat Stoke (A), Sunderland (H) and Everton (H) then they’ll end the season on 75 points.

City on the other hand need two wins from Leicester (H), West Brom (H) and Watford (A) to reach 75 points, while Liverpool are currently on 70 points with two games, West Ham (A) and Middlesbrough (H), left to play.

Whisper it, but we reckon the Gunners might just sneak in after all, especially if Liverpool make a hash of that West Ham game.