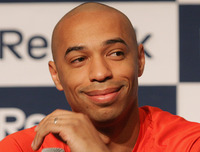 No player is bigger than his club, but someone forgot to tell Thierry Henry, who doesn’t seem to want to stop the gossip about where he might end up next season. I could be wrong, but Henry seems to relish the ceaseless transfer speculation surrounding him, which he could put an end to by simply saying ‘I am definitely staying at Arsenal next season,’ or ‘I’m looking to move to another clubâ€¦’
Saying he was ‘flattered’ by AC Milan’s reported interest helps no one, least of all Arsene Wenger, who needs to know Henry’s intentions. Henry loves the spotlight, doesn’t he? But is he any less arrogant or problematic than Nicolas Anelka, say? We’d love to hear your viewsâ€¦