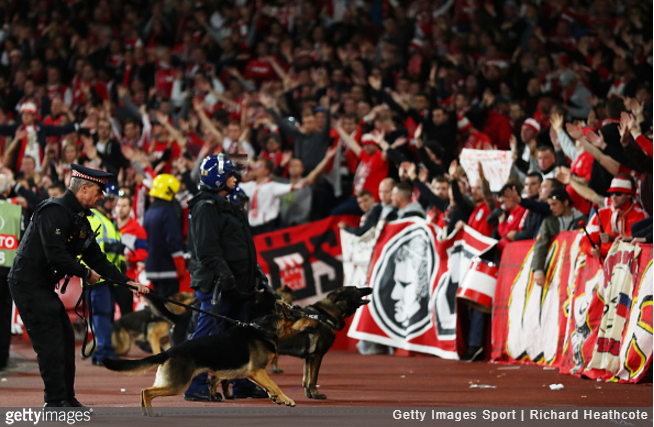 Given some of the fevered outcry, you’d be forgiven that the Emirates was raised to ash on Thursday night, as hordes of swivel-eyed Cologne fans stormed the gates, breached the perimeter walls and ransacked absolutely everything Arsenal Football Club hold dear.

Despite an official ticket allocation of just 3,000, a reported 20,000 Cologne fans made the trip to London for the Europa League clash, such was the prestige of the occasion, especially for fans of a club more attuned to the sapping disenchantment of perpetual Bundesliga relegation.

FC Koln have arrived & theyve brought 70% of any atmosphere the emirates will have tonight. pic.twitter.com/wlm9sG1XHg

The match was a big deal for Cologne – a ‘cup final’, to use the accepted parlance – and their supporters treated it as such, spending way over the odds while booking flights and trains as soon as the fixture date was confirmed.

Sadly, the fervour did boil over in small, isolated pockets, with kick-off delayed for over an hour as ticketless fans attempted to wriggle into the stadium.

BT Sport reporter Archie Rhind-Tutt gave us some wonderful on-the-ground insight into some of the lengths Cologne fans were going to sneak into the home sections undetected, including buying Arsenal scarves and even changing their phone backgrounds to images of the Gunners’ club crest, such was the clamour to get in.

Some Köln fans even changed the wallpaper on their phones. https://t.co/xgkrKCQXmV

Cologne fans going to extreme measures to avoid being detected in the home end. Including Arsenal wallpapers in case they are asked. #afckoe pic.twitter.com/Kd1QYMN5sA

As a result, many Arsenal fans were left fearing for their Deli-style spiced cauliflower and tahini salads at the sight of Cologne fans supplanted in the home sections and cheering for their side in overtly boisterous fashion.

Bristling atmosphere, of course, being a largely foreign concept to those who frequent the Emirates on matchdays.

Example of just how many Cologne fans are in the Arsenal end. pic.twitter.com/tvrA97qGvI

That said, it would be wrong to gloss over the more troubling aspects of the chaos, with multiple flares being let off and isolated pockets of Cologne fans filmed tussling with stewards and even opposing fans throughout…

Fighting breaking out between Cologne fans and Arsenal supporters pic.twitter.com/Epf91yR39y

Unfortunately, every club has its dickheads and a UEFA investigation is probably pending as a result. Maybe Arsenal should have a good hard look at their ticketing policy too, if they hope to avoid similar scenes in the future.

Still, by and large, the match passed without major incident, as the majority of Cologne fans simply enjoyed the night in the typical rumbustious fashion that patrons of the increasingly sterilised, overly pampered Premier League just aren’t used to seeing anymore.

A footballing culture clash, if you will.

Oh, we nearly forgot to mention: Arsenal eventually ran out 3-1 winners, not that that stopped Cologne fans singing to themselves for 10 minutes after the final whistle despite repeated calls for them to disperse…