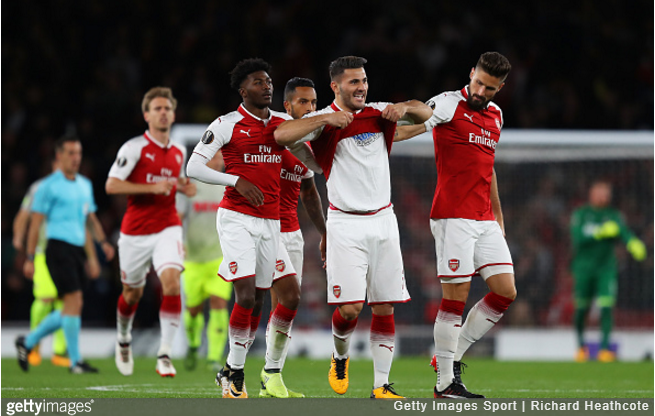 After going 1-0 down to a Jhon Cordoba screamer with just nine minutes of the clock, it took Arsenal until the second half to restore parity with Cologne on what proved to be a tumultuous start to their Europa League campaign.

The goal came from Sead Kolasinac, who entered the fray as half-time substitute and took roughly three minutes to clang home an absolute gem of an equaliser on the volley from a tight-ish angle…

The Bosnian wing-back then celebrated by goading the already animated Cologne fans inside the Emirates by unveiling an undershirt bearing the name of rival Bundesliga club Schalke, for whom he used to play.

Upon closer inspection, the t-shirt referred to the ‘Nordkurve’ – the end of the Veltins Arena in which the most passionate Shalke fans usually congregate.

As if the atmosphere wasn’t febrile enough to begin with.

It’s perhaps a blessing that nobody inside the ground could actually tell what was on Kolasinac’s t-shirt from where they were sitting anyway.