Mesut Ozil has announced his retirement from international football, claiming the German Football Association’s attitude had made him “no longer want to wear the German national team shirt”.

Ozil was heavily criticised for his performance at the 2018 World Cup, where a lacklustre German side failed to make it out of the group stages.

Prior to the Word Cup, Ozil also found himself in hot water with the German media and political establishment after he and Manchester City’s Ilkay Gundogan were photographed with Turkish president Recep Tayyip Erdogan at an event in London. 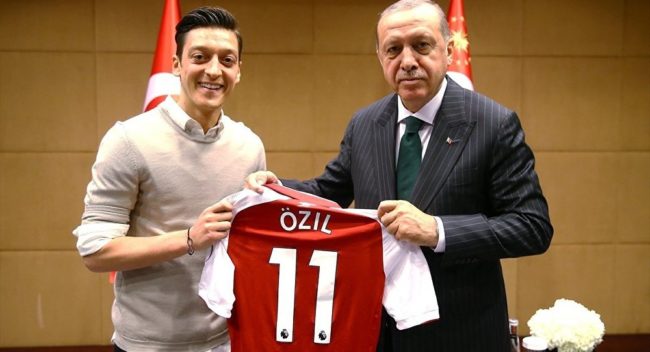 Now, the Arsenal playmaker has decided he has had enough, posting a lengthy statement on Twitter where he explains the importance of his Turkish heritage as well as pointing the finger at the DFB’s president, Reinhard Grindel.

For me, having a picture with President Erdogan wasn’t about politics or elections, it was about me respecting the highest office of my family’s country. My job is a football player and not a politician, and our meeting was not an endorsement of any policies.

The treatment I have received from the DFB and many others makes me no longer want to wear the German national team shirt. I feel unwanted and think what I have achieved since my international debut in 2009 has been forgotten.

People with racially discriminative backgrounds should not be allowed to work in the largest football federation in the world that has players from dual‑heritage families. Attitudes like theirs simply do not reflect the players they supposedly represent. In the eyes of Grindel and his supporters, I am German when we win but I am an immigrant when we lose.

It is with a heavy heart and after much consideration that because of recent events, I will no longer be playing for Germany while I have this feeling of racism and disrespect. I used to wear the German shirt with such pride and excitement, but now I don’t.

Ozil certainly pulls no punches here but his comments are sure to put the German footballing authorities under the spotlight.

The 29-year-old is no stranger to criticism, with his performances regularly pulled to pieces by journalists, pundits and Twitter’s infinite army of angry ‘experts’.

It seems that the German has finally had enough, which is understandable. His performances in Russia were admittedly disappointing but no worse than most of his teammates.

With 23 goals in 92 appearances and a World Cup winner’s medal to boot, Ozil has been a fine servant to his country’s national side. However, now he can focus on helping Arsenal to kickstart their fortunes under Unai Emery, once the dust has settled on all this.

Here are the full statements as Tweeted by the man himself…

The past couple of weeks have given me time to reflect, and time to think over the events of the last few months. Consequently, I want to share my thoughts and feelings about what has happened. pic.twitter.com/WpWrlHxx74