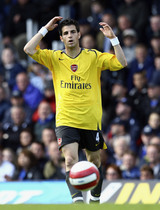 Barnet host Arsenal in a pre-season friendly this Saturday at 3pm, in a North London clash of the haves and the have-nots. The match is Arsenal’s first competitive game of the new season, so it will be interesting to see what sort of a team Arsene Wenger chooses to field. I’d imagine he’ll ring the changes and make as many substitutions as possible.
I’m sure Arsenal fans will want to see their new signings in action, especially Eduardo da Silva, the man signed to fill a Thierry Henry-shaped hole.
Can Barnet shock the Gunners and win? There can be no better time than the first friendly of a new season to play a big clubâ€¦ (for ticket enquiries, click here)