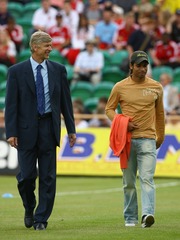 Gunnerblog makes an interesting point about Arsenal’s current squad in its match report of the Gunners’ 2-0 friendly win at Barnet this weekend: ‘One man who wasnâ€™t in the side despite his presence at Underhill was Eduardo [da Silva]. Worryingly, he is very very slight in the flesh (as you can see from the picture). If a breeze had struck up, he might wellâ€™ve blown over. People talk about missing [Thierry] Henryâ€™s speed and finishing prowess, but letâ€™s not forget that the man was six-foot plus and incredibly powerful. Our already small team is getting smaller.’
We’ve already seen Premiership teams (I’m thinking of big, powerful outfits like Bolton and Chelsea) physically dominate Arsenal in the past couple of seasons, and with Henry replaced by the diminutive da Silva, I can’t see how that’s going to change. Arsenal really do have a small squad of players, not in terms of numbers but physical size. Compare them with Chelsea, for example, and they look positively lightweight. The way football is going, you need skill and power to succeed. Arsenal clearly have the former, but they are sorely lacking in the power department and for that reason alone, I can’t see them finishing in the top three this season. Do you agree?