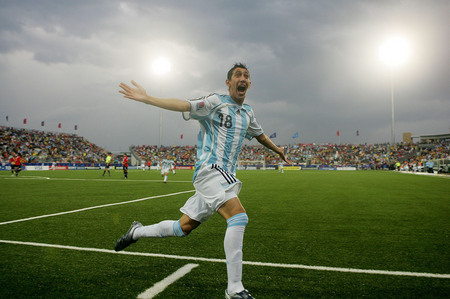 Angel Di Maria (just signed by Arsenal, apparently) of Argentina celebrates scoring the first goal against Chile during their semi-final game at the Fifa U-20 World Cup, held at the National Soccer Stadium in Toronto, Canada. It was a very ill-tempered game that ended with ugly scenes after the final whistle; Chile also had two men sent off. What is it with these crazy South Americans and Latin types? They’re such bad losers. Anyhoo, watch video highlights of the match after the clickâ€¦
[Photo: Nick Laham/Getty Images]