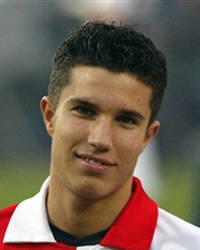 Now that Henryâ€™s off enjoying the siestas at Barcelona, itâ€™s up to Robin van Persie to step up and be the main goal threat at Arsenal, right? Wrong. According to the Dutchman, goals arenâ€™t all that important, a bit over-rated really: â€œIt’s not my aim to be the top scorer. My aim is to play good football with this team. I think we showed that against Inter. A lot of players are saying â€˜oh, I have to be the top scorer’. But for me the first thing is to play football. Of course there are lots of responsibilities because you are playing in front of 60,000 people.â€
After all who cares about a goal when you can hurt the opposition just as much with a few neat dribbles and nut-megs, hey Arsene? What is this â€“ a cosy/ cosy approach for those players too scared to take a shot on goal? Just dress the opposition goalies up as a page 3 girls, and youâ€™ll be batting the players off with pointy sticks.