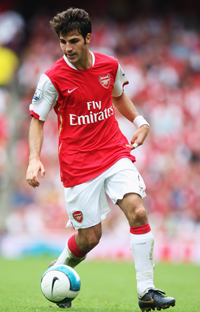 Cesc Fabregas starred again for Arsenal in their 3-1 win over Portsmouth on Sunday. Heâ€™s only 20 but the young Spaniard is showing the sort of match-winning maturity that could see his dream of one day captaining the side come true.
By netting his fourth goal heâ€™s already equaled last seasonâ€™s scoring record and it was his cunning plan that put Rosicky through for the Goonerâ€™s decisive goal.
Highbury needs a new hero and, while it was always going to be difficult to fill a Thierry-sized gap, Fabregas has risen to the challenge â€“ and looks like being next in line to the crown worn by Viera and then Henry.
He’s already replaced one of those in fans hearts with a match winning performance against a tired Viera’s Juventus in the Champions League.
But has Fabregas’ form made it easier to forget about Henry?