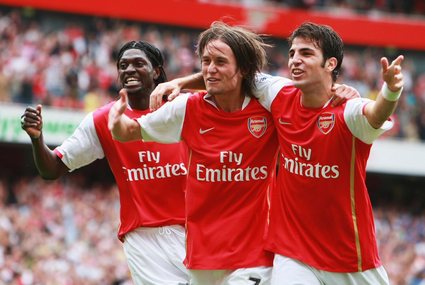 For all their attractive football and their dominance of the 2004-05 season, you have been able to discount Arsenal as genuine title-contenders for the last couple of seasons. Thierry Henry ‘s exit this summer didn’t look like improving things, and yet the Gunners are top-of-the-table with a game in hand.
Cesc Fabregas has found yet another gear, Emmanuel Adebayor has grown in stature to fill the void left by Henry and Wenger’s relatively low-profile signings seemed to have slotted in well. In addition to that, the club’s reserves comfortably knocked Newcastle United – the fifth-place team in the Premier League – out of the Carling Cup last night and the latest figures show that the Gunners are now the richest club in the Premier League.
So, has Wenger assembled yet another title-winning side with minimum fuss or will Arsenal’s season peter out as their rivals find form?
Photo Getty