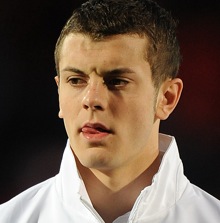 Arsenal and England midfielder Jack Wilshere was arrested in the early hours of Sunday following a “fracas”.

A statement issued by the Wasserman Media Group on behalf of the 18-year-old claimed Wilshere was “unlikely” to face charges.

The statement read: “Jack Wilshere was arrested by police in the early hours following a fracas but was released on bail later. The police have made it very clear that he is an important witness to the incident and played the role of peacemaker and is unlikely to face any charges as a result. Jack has made it very clear he will co-operate fully with the police investigation.”

Welcome to Team England, Jack – you are ready to share a dressing room with men like John Terry and Ashley Cole. If that Jackass Capello picks you again.