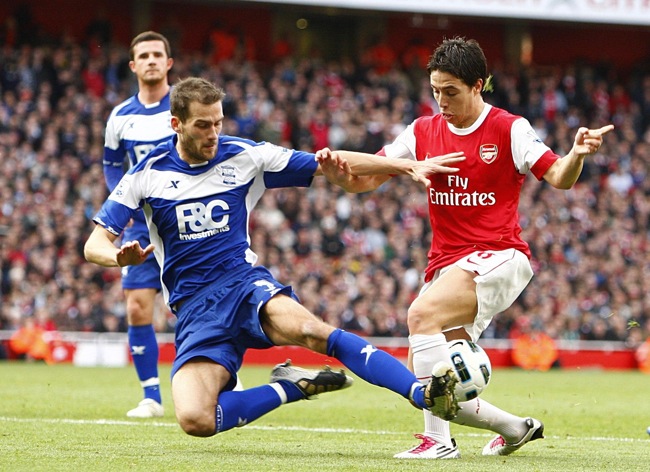 Arsenal vs Birmingham continues to develop into a really hateful fixture. Mmm, we like it spicy. After Arsenal’s 2-1 win against McLeish’s lot at the Emirates on Saturday, Brum centre-back Roger Johnson accused Marouane Chamakh of diving, then compared Jack Wilshere’s red-card tackle on Nikola Zigic to Martin Taylor’s infamous leg-breaker on Eduardo (Big Eck also mentioned Eduardo and Wilshere in the same breath):

We all think it (the penalty) was the wrong decision. Chamakh’s reaction was an embarrassment

These decisions determine people’s livelihoods in the league. If we go down by a point we will look back to a game like this and think we’ve been harshly done by.

From what I saw the Wilshere ­challenge looked quite bad. Ziggy’s a big lad, not the type to go down to milk it. It looked bad. I thought Eboue’s tackle was awful as well.

It (Wilshere’s challenge) was not too dissimilar to the tackle on Eduardo by Martin Taylor – ankle height, could have snapped his leg. Thankfully it didn’t.

Strong words from Taylor (wrong words too: Wilshere’s tackle was badly mistimed but nothing like as brutal as Taylor’s), to which Chamakh answered back:

If they think it is not a penalty then they can be disappointed but for me I was definitely touched and I fell because I was touched otherwise I wouldn’t have fallen down in the area.

If they believe it was not a foul and they were one-nil up and obviously it changes the game a bit then it’s normal that they will feel disappointed now. But for me it was definitely a penalty.

I think it probably was a penalty, but there’s little doubt that Chamakh could have stayed on his feet. But that’s the game today: a contact sport that allows increasingly little contact. And let’s say it together: English players dive too.

Do you think Chamakh dived?