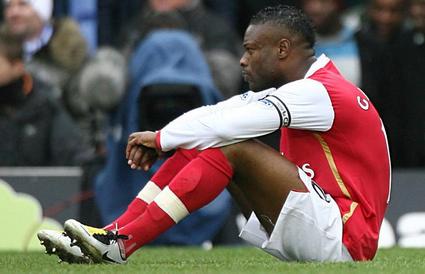 Pies analyses possible reasons why Arsenal captain William Gallas chose to hold a sit down protest in the centre circle after the draw with Birmingham at the weekend.
1 Laziness
It could just be that he was worn out after the match
2 World peace
An old favourite. Lennon may play for Spurs, but Willie Gallas can still do his bit.
3 Campaign for comfier football pitches
Gallas raises awareness that Premier League football pitches are not very comfortable to sit on. Maybe more players would enjoy a nice sit down at full-time if the pitches were more cushioned.

4 He is sponsored by Germoloids
“Not even sitting on wet football pitches affects my piles.”
5 Climate change
Every other celebrity has been hypocritically preaching about global warming and maybe Gallas decided to get in on the act.
6 Climate change
Alternatively, maybe he actually wanted to sit and watch the climate changing.
7 A change of career
Willie might fancy a job as a Fly Emirates advertising hoarding.
8 He wanted a transfer
Gallas does have a history over protests and, if required, one-man industrial action if he fancies a move.
9 He is a winner
This suggestion courtesy of Arsene Wenger who defended his sulky skipper and said: “He was frustrated, he is a winner and sometimes you have to get your frustrations out.” We are just surprised he witnessed the incident.
10 His overinflated ego thought it would be good to show Arsenal fans just how distraught he was at the result
Nuff said