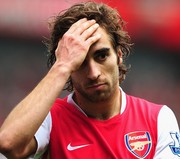 Come with me, Pies readers, on a journey through time and space. Well, a journey inside the brain of Mathieu Flamini actually. The Frenchman’s logic has got me a little baffled so I’m hoping that we will be able to piece together some answers between us.

Unsettled footballers are not uncommon. Neither are unsettled Arsenal players. Especially common are unsettled Arsenal youngsters. Arsene Wenger is like a young footballer collector: he buys lots of them but keeps most in their original packaging rather than getting them dirty on the football pitch. Mathieu Flamini has been one such player in the past. He spent his early years at Arsenal as a bit-part left-back and reserve utility man. But young Mathieu didn’t get disheartened, didn’t throw his toys out of the pram, and didn’t follow the procession of young talent out of Arsenal.
Fast forward to this season. Flamini is now being played in his favoured central midfield position. He has established himself as a top Premier League player and formed a formidable partnership with Cesc Fabregas. Why then is he now quitting on a free transfer to join Juventus? Answers on a postcard (or as a comment) please.