Arsenal boss wants to buy central defender & playmaker in the summer. Who should he target? 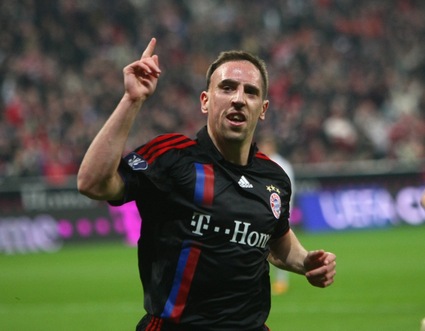 Arsene Wenger has admitted he wants to strengthen his young Arsenal squad, specifically with two key summer signings: one centre-back and one creative midfielder.
So I’m asking you to advise Monsieur W on which two players to go for.
My two choices would be:

Centre-back
Micah Richards (Man City)
He’s young, freakishly strong, quick, athletic, versatile… everything that Wenger likes in a player. Only his nationality counts against him. He supports Arsenal, too. If it was me, I’d do everthing in my power to bring Richards to the Emirates.
Other options: Luisao (Benfica), Marco Andreolli (co-owned by Inter/Roma), Nedum Onuoha (Man City)
Creative midfielder
Franck Ribery (Bayern Munich)
Ribery, a compatriot of Wenger, has proved his class time and time again at Bayern this season. Owen Hargreaves’ sale to Man Utd proved that the Germans don’t mind selling at the right price. Would Arsenal be prepared to splash out the Â£20m + that is might take to buy Ribery. And would Ribery want to leave a club where he appears to be settled and happy?
Other options: Diego (Werder Bremen), David Bentley (Blackburn – shit, didn’t he used to play for Arsenal?), Ashley Young (Aston Villa)
Who would you put on Arsene’s shopping list?