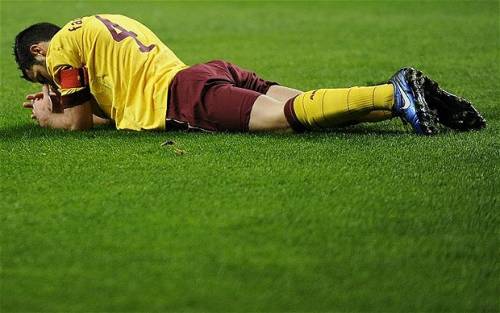 Get ready for a spot of injury round-uppery with the news this afternoon that Arsenal have confirmed captain Cesc Fabregas is now expected to miss yet another fortnight, after once again twanging his hamstring against Braga in the Champions League on Tuesday evening.

Manager Arsene Wenger revealed the tentative prognosis to Arsenal TV Online, also admitting that he expects Emmanuel Eboue (who ruptured his knee ligaments in the same game) to be sidelined for a month at the very least:

“Eboue has a medial knee ligament strain, It can be four weeks, can be six weeks or can be eight weeks. But I think it will be four weeks minimum.

“Fabregas will be assessed today with a scan. After that we can tell you how long he will be out, but I count two weeks.

“It is a big blow because it will question how cautious we have to be in the future with him. Cesc has played 50 games a year since a young age. We may have to be more cautious with him, especially in the next two months.”

How long will it be before that formidable medical team they have in place at Arsenal go about working their ‘mystery setback’ magic, turning ‘two weeks’ into ‘two months’ in front of our very eyes?