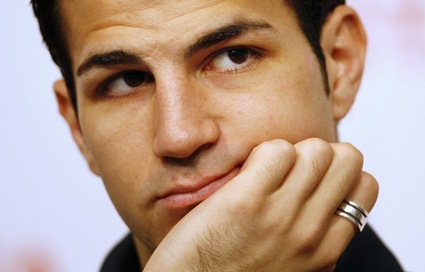 Cesc Fabregas was dining out with two female friends at Soho club Studio Valbonne when his bill of almost Â£300 arrived.
A witness said: “He tried one card, it failed. Then another. It failed again. After much faffing he sent an aide out to get cash.”

The Mirror was reportedly told: “Cesc told the girls to order whatever they wanted. They even had two rounds of lobster soup and salmon galore.
“He apologised profusely and paid when his aide turned up with the money.”
A Studio Valbonne spokeswoman said: “We were very happy to have Cesc eating in our restaurant. They seemed to have a great evening.”
See, even when you earn Â£80,000 a week, it doesn’t mean your credit cards always work. And two rounds of lobster soup? Madness gone mad.