Liverpool have a history of near-hysterical levels of imagined persecution and self-mythologising. Everybody knows they had the chippiest fans of all the top teams. Now they’re not a top team, so who’s next? Given the actions of the past few years and particularly the last few weeks, it has to be Arsenal. The Islington Set are a churlish bunch.

King Rat, Cesc Fabregas. A player with the swagger of a man but the personality of a lippy kid. Defeat and difficulty are answered not with indomitable rage but with petulance. Pizza at Ferguson. Gobbing at Brian Horton. Traducing Mark Hughes’ career. Not even deigning to recognise Ipswich. Accusing the opposition and officials of bribery. If you don’t speak Cesc’s sacred Catalan, the translation: any of Arsenal’s failures or my own are not my fault.

The Fergie-pizza interface was one thing. Fabregas was a kid, and this was just a moment of immaturity. However, his hollow whinges and justifications become more frequent, not less. 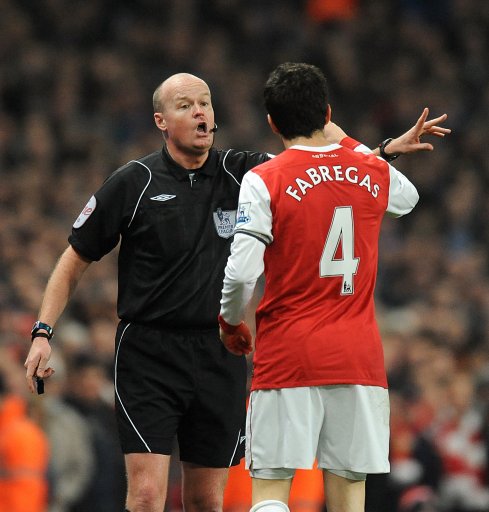 As captain, Fabregas sets the tone of the team. On the pitch, he has as much influence as the manager, and off it, he’s the role model, showing what behaviour is appropriate and tolerated. It’s been Wenger’s biggest mistake. Fabregas carries on as if butter wouldn’t melt and yet he’s still handy in a fight. If only this were true. A fantastic midfielder, his failings are still legion. One, he flirts openly with Barcelona as if it’s his right. Two, he abuses referees and questions their integrity on Twitter and in the tunnel. Three, he criticises his own team-mates on the pitch, like Thierry Henry without the hat-tricks. What captaincy. Maybe his attitude will change when he’s at Barcelona. On the bench.

Where Vieira would inspire with a crunching tackle, even a red card, or Henry would win a game single-handed, Fabregas simply cannot. That’s not necessarily a problem, but he’s a smallish midfielder, emphatically not a goalpoacher. If he’s going to be as effective as possible he really ought to figure out how to get on with his team-mates. If he cannot inspire through his actions alone, surely he needs to start empathising and encouraging. Only a couple of weeks ago Denilson was happy to describe him as, “a captain, but not a leader.”

It’s not just Cesc, though. There are minor offenders. Nicklas Bendtner thinks he’s the Danish Ibrahimovic. He (and his Dad) gets jolly shirty when anyone suggests otherwise. Regularly mentioning interest from AC Milan while the papers mention interest from Newcastle, he has to be the most delusional player in the Premier League. Just think of the competition. At least you’re the best at that, Nicklas!

Wojciech Szczesny, learning from his surroundings, might just be a kid, but feels assured enough to bollock any ref from his iPad Twitterbox. Imagine being the type of man to use an iPad without feeling ashamed.

Jack Wilshere, a technically able git, is as close to an English Fabregas as we’re ever likely to have. In many ways that’s fantastic: a technically able midfielder is the very thing England have appeared unable to produce. It’s just such a shame he seems to have inherited the Gunner bolshy sense of entitlement – tweeting allegations of refereeing incompetence as if it’s only experienced by Arsenal, and being arrested for fisticuffs. Even then, he claimed he was an innocent party regardless of evidence. No wonder, I suppose. This is the man who was sent off through sheer nastiness and carelessness against Birmingham, only to be applauded by the most indulgent fans you could possibly imagine. If there’s a club that can be described as incapable of learning a lesson, it’s Arsenal. 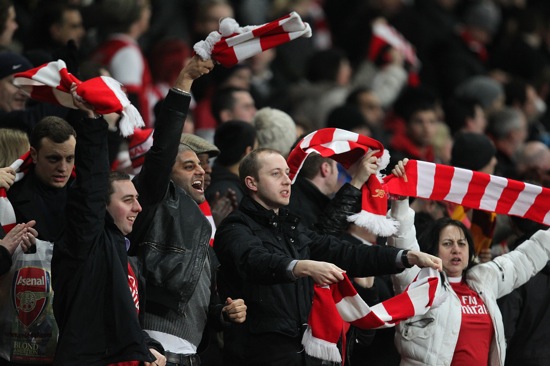 Ah, Arsenal fans! If Cesc and Arsene share the blame for creating this sorry spectacle, then fans are due some of the blame. Is it any surprise that a club that charges more than £100 for tickets ends up with support betraying the worst qualities of the middle-class – pretentiousness and self-importance? A walk through Islington and you would be forgiven for thinking you were in France. Well, a kind of France, stuffed only with unimaginably smug middle-class white people. It’s the Emirates Stadium in microcosm.

Where does the buck stop? Daddy Wenger. He created an economic model that entitles him to witter on about financial doping, while charging the first aforementioned £100 ticket and paying the third-highest wages in England. He exacerbates the very problems he pretends to care about. He waxes injustice at the purchases of Chelsea in the face of financial fair play, yet Arsenal sold Highbury to private developers for millions, despite Islington suffering extreme housing inequality; it’s one of the most deprived – in some areas – boroughs in London. He doesn’t see his players getting sent off for thuggery, from Dennis Bergkamp through to Abou Diaby, and still has the front to complain at opposition rough-housing. A hypocrite.

I call bullshit on Arsenal.